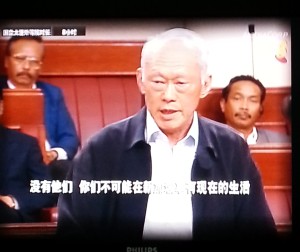 my first memory of Mr LKY.

My very first memory of you was seeing you in Parliament on Ch8’s news. You were always in a white shirt with either a blue or black jacket. I was too young then to know who you are, that you were debating about things that helped me become who I am today.

One of the things I always find hard to explain to friends from other countries was our unique blend of culture. After all, we are a country made up of immigrants. “Singapore? What’s your race? Chinese? Then are you from China? Is that friend from India?” Common questions that they ask. They don’t know we have all called Singapore home, that we have accepted each other’s differences and bonded. To quote something I heard on TV, “I always introduce myself as Singaporean. Not an Indian or a Singapore Indian. I’m just a Singaporean.”

I’m not good at saying goodbyes. I’ll miss looking out for you during NDP. Sometimes, I feel lost when I think that you are not here anymore. To quote PM Lee, “..when he’s there, you know you will be alright, that everything will be okay, you will get through it.” I wish I had paid more attention to watch those Parliament highlights as a kid.

“We don’t have everything, but we have more than most, because of your lifelong labour. On behalf of young Singaporeans everywhere, I’d like to say: thank you.”

Ever since I started work again 5 weeks ago (feels much longer than that), I found myself eating lunch alone more often than not.

My team is really small. About 5 people (including myself) and I think they seldom lunch out.  I don’t have a orientation buddy. So that pretty much rules out lunching with folks in the office.

I do lunch with ZQ about once or twice a week though. Since we are both on some mega saving plans or other. But sometimes, he gyms, I am lazy and we just don’t meet. I have also met Jerrick several times (:

Plus, with my $5 a day budget, it’s easier to just lunch alone than having to explain and defend the plan. Also, I am in this stage where…eh…let’s just say I am in one of my quiet stage now.

SO! It is not uncommon to find me eating alone by the bay (: You will be surprise how many people eats there. Sometimes, it’s quite hard to find seats that are in the shade. Especially with the awesome weather in the past month.

Initially, I do feel awkward about eating alone. But after the first few times, I got used to it and even start to enjoy it. The quiet is awesome. And you are just spending time by yourself. No one to judge you, no need to make small conversation (when you don’t want to). It’s soothing~ Especially since work has been rather *ahem* recently. When there’s a chance to retreat into my shell, I grab it!

And because I lunch alone so much, I have also started going for lunchtime photowalks. Or even just taking photos from where I eat (:

Here’s some shots from my walks last week –

no caption for this.

where are you, my love?

Also, because I am alone and hence have more time to slowly walk and look around, I realised that there are actually terrapins/tortoise in the Singapore River! (:

I am also planning to play catch up with my Korean over lunch soon. And maybe to head to the Art Science Museum for the dinosaurs exhibition! So, who says alone is always bad? ;p

Actually, even when I was at Maybank, I opt to eat alone sometimes by either not joining them to eat out or just running out of the office ;p Yes, I need my me-time so that I can generate enough energy to be a little bimbo ;p

Anyways, if you are town and want to do lunch, let me know!(: